Mass street football was commonplace throughout towns and villages in this country over five hundred years ago. It is not surprising that these ancient games, the originator of modern soccer and rugby, have long since died out. There are several places today, that continue this ancient tradition, Atherstone in Warwickshire, Workington in Cumbria, Jedburgh in Scotland, and Kirkwall in Orkney, to name but a few. It is in Ashbourne that we are more world famous for the tradition. We do not have detailed records of when mass street football originated in our town as a fire broke out in the committee offices in the 1890's but there is indeed mention of it being played in 1822. Many believe that our custom is much older than this, dating back to at least the 1600's, where one of the first references to it was made to the game is found in a 1683 a poem called "Burlesque upon the Great Frost" which was written by Charles Cotton, the brother of the Baronet of Ashbourne. Derby played a similar game on Shrove Tuesday between the parishes of St Peter and All Saints. The Derby game was abandoned in 1846 when the riot act was read, and their ball is now an artefact in Derby Museum

Ashbourne's annual game is played every Shrove Tuesday and Ash Wednesday. The Town literally divides itself into two. Originally the game was played between the separate townships of Ashbourne and Compton, but this drastically changed when Compton was amalgamated into Ashbourne in the 1860's. The teams are mainly decided today, by family tradition but at one point, it depended on which side of the river Henmore you were born. Born North you play for The Up'ards and born south you play for the Down'ards. The Goals were originally mill stones in two corn mills spaced three miles apart on the river Henmore and goals are scored at the player's own goal. Clifton Mill was demolished in 1919, and Sturston more recently in 1981. Both mills today, are represented by purpose built stone goals in the river on which the victorious player taps the ball three times on a representation of a mill wheel. When this occurs that game is over and the player who goals the ball keeps it as his trophy, he is hoisted triumphantly on his fellow team players shoulders and taken back to The Green Man in the centre of Ashbourne where a Shrovetide official deems the goal to be valid. Homes of Ashburnian's all over the world contain these famous leather balls.

The game in Ashbourne has always started at 2pm. Originally the game was started on the marketplace until 1862, when it moved to Shaw Croft and remains there to this day. A local celebrity or ex player is usually asked to start the game. After being dined at a lavish lunch the starter or "turner up" carries the ball through the streets of the town to Shaw Croft. Here, after singing Auld Lang Syne and The National Anthem, the ball is thrown to the waiting players and the game commences, up until 1967 the game was played until midnight, it is now played until 10pm. If the ball is goaled before 6pm then a second ball is turned up for play that evening.

is the ball? Well, it is manufactured to a traditional method in the town. It is made of stout cowhide leather hand stitched with seven cord hemp and filled with shavings of cork. The ball although weighty, will float in the river but stout shoes are recommended if one decides to kick it in play. Ashbourne can boast that it is the only town that plays with a hand painted ball. The leathers are decorated with images chosen by the person who has been asked to start the game, depicting their life and interests. Ball painting started around 1897, only five people have been entrusted to paint the balls, Ashburnian's believe their game is worth a coat of paint!! The paint does not last for long in a good game and any scorer can have their ball repainted to commemorate their goal.

Ashbourne Royal Shrovetide Football is the only mass street game to have Royal in its pre-fix and owes this to Princess Mary who was gifted a Shrovetide ball bearing her portrait, on the occasion of her wedding on Shrove Tuesday 1922. The Princess Royal was so touched by the gift she wrote to the people of the town and bequeathed the game royal patronage. This was strengthened in 1928 when the Prince of Wales, later Edward the VIII turned up the ball, and more recently Prince Charles in 2003.

It would be wrong to say our beloved game has not suffered or still suffers. In the 1860's many attempts were made to stop the game. In fact, Mrs Elizabeth Woolley (nee Barnes) saved the game by smuggling the ball up her skirts and throwing the ball to waiting players. Indeed, three members of the fair sex have goaled balls, Doris Mugglestone and Doris Sowter in 1943 and Nora Wibberley in 1957. Two great wars failed to stop the game being played, although players were depleted. Balls were sent to local lads fighting on the front line in France in 1916 and 1918. 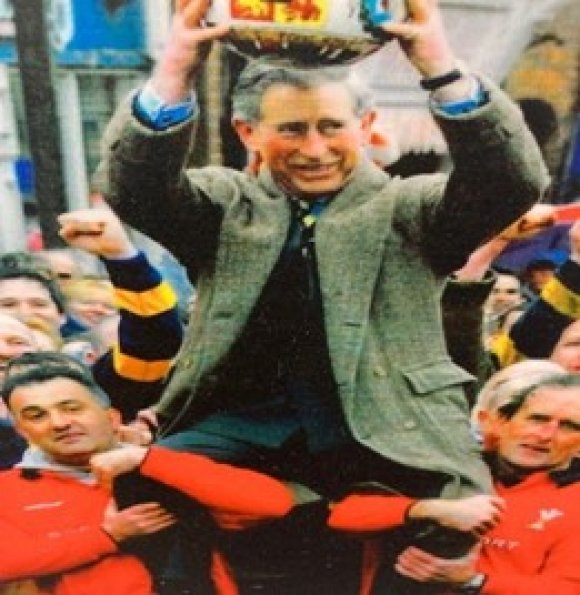 King Charles III, when he was The Prince of Wales being held aloft before turning the ball up

Wonderful news for Ashbourne*GREAT NEWS*! The £15-million transformation of Ashbourne town centre will start this year after government today approved an exciting Levelling Up Fund bid."Ashbourne Reborn", led by Derbyshire Dales District Council, was developed through close working with local partners who brought forward project ideas, identified opportunities and raised match-funding for the bid.The partners include Ashbourne Town Team, Ashbourne Town Council, AshCom, Ashbourne Methodist Church and Derbyshire County Council.News that the bid – submitted to government at the end of July – has been approved means partners can develop more detailed plans for the two-year development project focused on three distinct project areas.The first is a series of transformed public spaces including Market Place, Victoria Square, Millennium Square and Shrovetide Walk, while the second project focuses on a new community hub, transforming the Methodist Church into a multi-purpose community building. The hub will provide a wide range of event and meeting spaces, a performance venue and flexible work areas with high quality digital provision.New traffic management plans will transform the pedestrian experience in Ashbourne by widening footways and providing new and improved crossings as part of the third project.District Council Leader Councillor Garry Purdy said: "This is fantastic news and we can all look forward to transformed spaces in which events and activities can take place, bringing a much needed vibrancy – and indeed footfall - back to the town."This will be the biggest capital grant project ever undertaken by this council and I want to thank all partners for getting Ashbourne Reborn to this exciting stage where we can start to restore pride of place and create a new safe and vibrant heart of the town for the benefit of local people and visitors."There is much work to do, not least through the planning process, even before the first brick is laid and I want to stress this project will remain a partnership – that is absolutely vital."The project will get underway with the formation of a programme board to be chaired by District Council Chief executive Paul Wilson, and the appointment of a programme manager.A key part of the project is to celebrate the town's heritage. A wide variety of future events will bring new life to the centre of Ashbourne, creating an environment where businesses will want to locate and invest, and residents and visitors spend time whilst supporting the local economy.Read more, including statements from all the project partners

Wednesday the 01st February 2023 6pm-7.45pm - Come and join Angelique Foster our Police and Crime Commissioner and local councillors to discuss issues of anti-social behaviour in Ashbourne. Following the session there will be a Q&A with ,member of the Safer Neighbourhood Team.Please note the registration for attendance or to pre-submit questions is through the portal here https://forms.office.com/e/HMKnY9ssrm

Government has announced that a decision on the planned £15-million transformation of Ashbourne town centre is likely to be announced at the end of January 2023.

The exciting Levelling Up Fund bid was submitted at the end of July this year and partners include Ashbourne Town Team, Ashbourne Town Council, AshCom, Ashbourne Methodist Church and Derbyshire County Council.